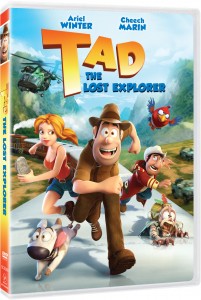 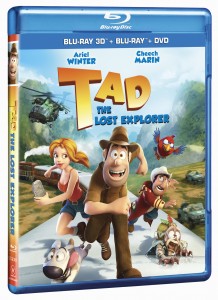 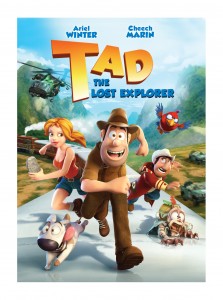 Tad: The Last Explorer is an absolutely great animated film.  At first just my husband and I started watching it, but soon it found it’s way into the playroom DVD player as well.  Carson watched it 5 times in a row.  I did have to explain the scary things were fake, and answer a lot of what is its.  It won’t be a go to movie for him until he is a little older, but I do see it as an active part of the rotation for my older kids and for Carson and Courtney when they hit elementary age.

The story is your typical Indiana Jones type story.  But what I enjoyed the most about this film, the lesson of facing your fears and being courageous.  When Tad faces his fears of the Mummies, they end becoming friends.  There is some adult humor as well, which makes it fun to watch as a parent.  Following Tad and his hyper dog to Peru was quite enjoyable, and the soundtrack will have you singing along, as the featured song is the One Direction song What Makes you Beautiful.

I do want to mention, that I am considering adding this movie to the Christmas Gifts for my Nephews.

Do you want to win a Copy of Tad: the Lost Explorer

This is considered a #sponsored post as I was provided a free copy of the series on DVD to review. All opinions are always my own. This is disclosed in regulation with FTC 16 CFR part 255 Guides to Endorsements and Testimonials in Advertising.

« How to Get Rid of Fruit Flies and Gnats
Carole P. Roman Celebrating, Talk Like A Pirate Giveaway »

I have been wanting to decorate our front door for the last six months, but just haven't gotten around to it.  I keep thinking oh I need to put up a wreath, or a sign or something to make our condo feel more homey.  But it … END_OF_DOCUMENT_TOKEN_TO_BE_REPLACED 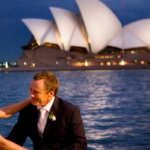 Every couple dreams of the perfect wedding. Many go the DIY route or work with a professional planner, however there is another option. A destination wedding can be the most has hassle-free choice of them all. The big step is … END_OF_DOCUMENT_TOKEN_TO_BE_REPLACED 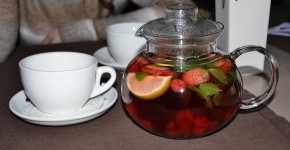 There are only two things you really have to know about brewing the ideal cup of tea. The first is … END_OF_DOCUMENT_TOKEN_TO_BE_REPLACED