My aunt has absolutely fallen in love with The Chronicles of Narnia. In fact, she adores the series so much that she decided to transform her empty attic into a Narnia-themed wonderland for her grandchildren.

C.S. Lewis’s Narnia books are considered to be among the best of children’s literature of all time. Loved by kids of all ages, my aunt included, the series has been adapted for stage, television and film numerous times over the years.

How it All Began

After my aunt was initially struck with the idea to transform her attic into a live version of that magical world, some basic sketches were created, and the attic wonderland transformation soon began. The entire endeavor most likely seemed to be an impossible task to onlookers. After all, could this really be transformed into Narnia?

Once complete, the attic would include a craft room, library nook, and a lodge-themed bathroom as well as Aslan’s Tent, which would be decorated in “Arabian Nights” décor. Aslan’s Tent would serve as a guest room for parents who were spending the night with their children in Narnia.

The final—and perhaps most important—aspect of the Narnia attic would be a wardrobe door leading into a bedroom for the grandchildren. Two ship-style berths, to resemble the Dawn Treader, would be tucked under the slanted ceilings found on each side of the room. Kings would be on one side, and queens would be on the other!

How it All Turned Out

Once the attic was emptied of its belongings, the project began! Initial framing and ductwork began in the attic.

as did Aslan’s Tent for the parents.

If you can believe it, this would become the lodge bathroom.

The library nook/sitting area, which is located in the hallway that leads into the other rooms, wound up being larger than it was originally planned, but that’s okay. More room for books! The craft room is adjacent to the library.

Books were cleaned and prepared throughout this entire adventure!

As you can imagine, the wardrobe would play a major role in everything. In C.S. Lewis’s books, the children escape to Narnia through a wardrobe, where all the magic began. This was one of the most important purchases of the entire project.

Due to its size, the wardrobe had to be taken apart to be transported home and into the attic, where it soon became the entry to the grandchildren’s magical room.

There’s no denying that completely transforming your attic is quite the construction job. A dumpster even had to be delivered to the backyard!

Once the subfloor was nearly finished, the construction workers installed windows upstairs. Soon, the entire attic became just as beautiful as was envisioned. Aslan’s Tent, the parent’s bedroom, was finished first.

The most important room in the attic also has award-winning appeal! The grandchildren love climbing through the wardrobe to arrive in their absolutely thrilling guest bedroom.

The kids also love to snuggle up with a good book in the library nook. There are certainly plenty of books to choose from!

Oh, and let’s not forget the craft room. Someone as artistic as my aunt still needs a place to work her magic. Its mystical stained glass door is appropriate, don’t you think? Everyone is already anticipating what her next project will be.

About Today’s guest Author:
Rebecca Fletcher writes for Purely Shutters, but in her spare time she drools over her aunt’s Narnia remodeling project – Mimi’s Wardrobe. When Narnia is completed, Rebecca is going to slip through the wardrobe doors for an adventure of her own. Perhaps she’ll get a glimpse of Mr. Tumnus or even Aslan himself.

« 50+ Awesome Homemade Gifts for Father’s Day! DIY Idea Gallery
Using a Crayon as a Candle in Case of Emergency » 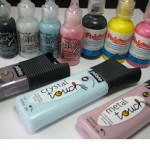 Fabric paints and Stickles Glitter Glue are lots of fun to use in scrapbooking projects, but the thing to remember when using them is that they need adequate time to dry, just like the Glossy Accents. 1. To add a bit of … END_OF_DOCUMENT_TOKEN_TO_BE_REPLACED 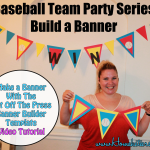 Personalized or Customized Banners are the latest thing for decorating for a party and so today we are going to show you a THIRD technique for making one.  These great little banners are super easy to make, and with the Hot … END_OF_DOCUMENT_TOKEN_TO_BE_REPLACED

I have been making French Toast since I was about 6 years old. It was one of the first things I ever … END_OF_DOCUMENT_TOKEN_TO_BE_REPLACED